HAVING been involved with the family business since 2015, Loh-Lim Shen Yi decided to return to Penang to lead the heritage Cheong Fatt Tze/The Blue Mansion fulltime in January 2020 “when I felt it could pay me a salary”, he laughed.

For the past 20 years, Shen (as he is known to friends) had been working in Kuala Lumpur, first in iproperty, an online real estate marketplace which was acquired by the recently publicly-listed Property Guru, and later as a venture capitalist in Frontier Digital Ventures, which invested in horizontal marketplaces across emerging markets.

“Well, we all know what happened after that,” added Shen. “Two months into the job and Covid happened, and the lockdown … the first person I slashed was myself, which is fine. It was humbling. Thank goodness I kept some work in Kuala Lumpur.”

Shen: “The lockdown gave us time to reassess and think what a 10-year life cycle in hospitality looks like, what could happen and what we are going to do next.”

Shen’s parents, architects Laurence Loh and Loh-Lim Lin Lee, are regarded as trailblazers in Penang’s boutique heritage hotel scene when they took on the historical home of Chinese merchant Cheong Fatt Tze, restored it and ran it as a boutique hotel. It’s possibly the most Instagrammable building in Penang with its iconic blue colour and has become a must-visit stop for every visitor to Penang. Its restoration won numerous awards including The Malaysian Institute of Architects (PAM) Architecture Award in Recognition of Design Excellence in 1995 and UNESCO’s Most Excellent Project in the Asia Pacific Heritage Award in 2000.

Recalling his transition from working in the tech industry to running a boutique hotel, Shen said, “From 2015, when I got involved, I started taking over most things, so the process was quite organic. I come from tech, which is high growth. We don’t skim on marketing, we spend to grow and we are used to 30-50% growth a year.

“Cheong Fatt Tze wasn’t doing too badly, we were growing an average of 30% a year top line and I didn’t mind spending the grow the business, until 2020. We were lucky, we had enough cash to get us through two years. Big lesson learnt – always keep cash in the bank.

“The lockdown gave us time to reassess and think what a 10-year life cycle in hospitality looks like, what could happen and what we are going to do next.”

As with every travel business in Penang, it pivoted to the domestic market. It did food delivery. “It didn’t pay the bills, it made up five percent of usual revenues but it got some cash in,” he said.

Rooms (the Blue Mansion has 18 rooms) and food & beverage formed the bulk of revenues and pre-pandemic, 90% of its guests came from overseas markets including Singapore, Australia, Europe, Japan and China.

It turned its sights to the domestic market. The first thing it did was cut prices to 60-70% of normal rate. “We went all out on flash sales, all kinds of sales, 2 for 1. We threw out the rule book. It was all about survival. We did it all online, email marketing to our database, retargeting. We did coupons, vouchers, everything under the sun. It helped us a bit, it was good for  cash flow.

“We introduced buy now, pay later to sell ahead and did really good deals where people had 12 months to use their vouchers. On hindsight, I am glad we did it, it helped.” 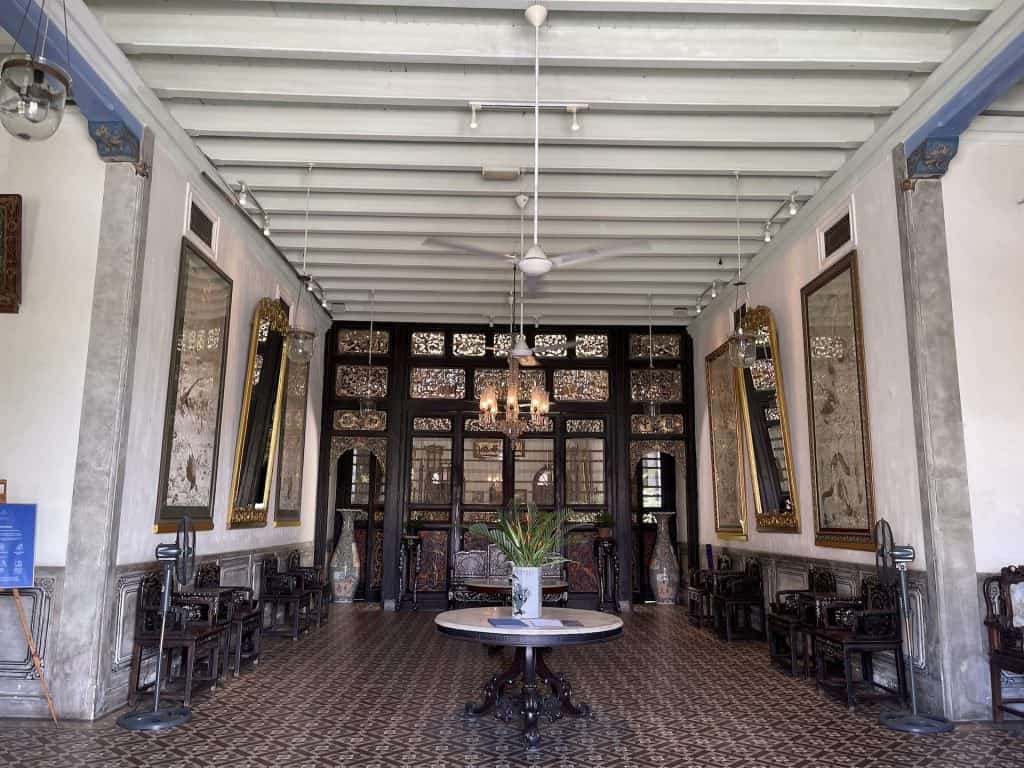 Inside Cheong Fatt Tze Mansion: “We threw out the rule book. It was all about survival.”

It worked with Malay and other local influencers and the hotel found a new market in Malay guests, a new set of customers it had never seen before. It did not have to alter the guest experience too much. It reduced its tours to three times a week which may not be a bad thing,

Shen said. “It reduces the volume of tourists coming through and protects the guest experience.” At its peak, it was getting 150 guests per tour and “it became invasive for the guests. We will reduce the capacity of the tours”.

It introduced audio tours with Smart Guide. “We haven’t seen good takeup,” Shen admitted of the service which requires travellers to download an app and listen to the audio with their own headphones. 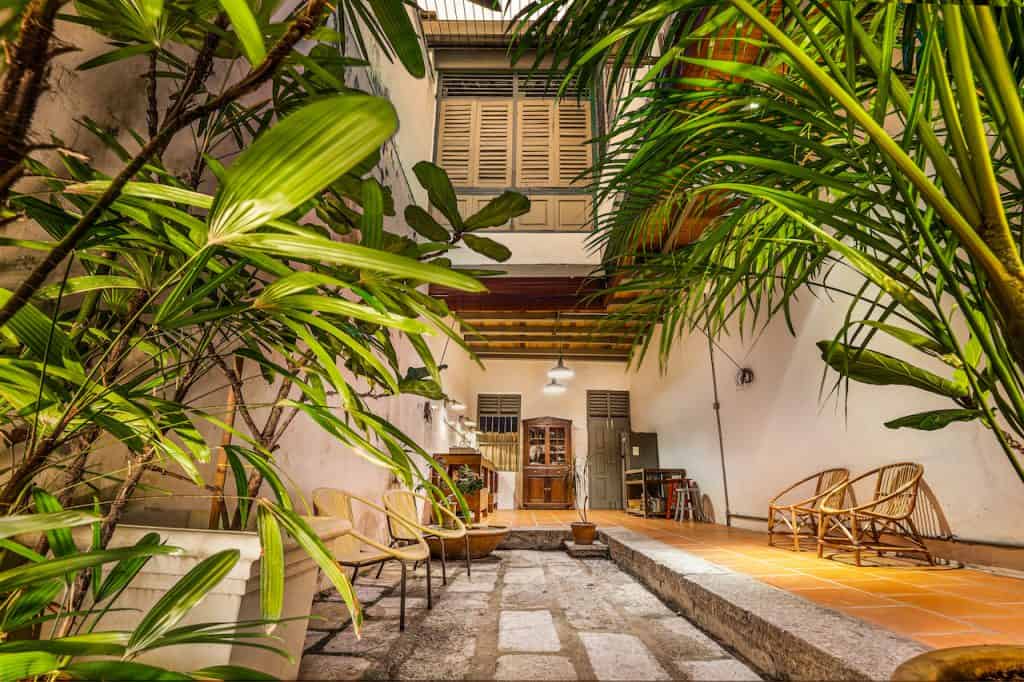 One of the townhouses by Blue Mansion

With the April 1 reopening of Malaysia, the hotel is seeing an immediate impact in bookings. “Every single time there’s an announcement, we see immediate impact. As soon as more borders open, we will get back to normal pretty quickly.”

Bolstered now with a new domestic customer segment, Shen is looking at how to expand and grow the business. “In 2019, we were running 85% occupancy and we couldn’t grow any more unless we raised prices or expanded rooms.”

A new wing of 13 rooms across the road will open by end 2023. It will not have two-tier pricing for locals and foreigners. “We are sticklers for rate parity, we may have special “fenced” pricing for Malaysian residents.”

Through the pandemic, more business came direct, “a product of what was happening with the OTAs and us offering best rates in our channel. No one could really say anything, because no one had volume. We are seeing it shift back again.”

The big challenge as travel recovers is finding staff. Said Shen, “We have a whole generation that has forgotten their manners. They don’t show up. They quit without telling you. But it’s no use lamenting. This is reality, the new world, a new generation that wants to do different things, just like we did, and we have to become more relevant to them. Maybe it’s more chat vs phone calls, better hours, different staff policies – it’s another transition we have to make.”

Shen’s decision to return to Penang was also prompted by a desire to change lifestyle, to a more laidback and flexible schedule. “I consciously made the decision to leave the corporate world, to become master of my own time. I also came into this, wanting to grow the business. I feel the business needs to grow into the brand, to have a business that matches the brand.”

The Blue Mansion brand is about “hospitality with a conscience”. “Cheong Fatt Tze stands for heritage, it set the tone for conservation and heritage in Penang, and underscores everything we do. Heritage is about preserving the past as well as protecting the future.”

Growing up with parents passionate about architecture, Shen avoided it completely “on my father’s advice,” he laughed. “He told me, ‘don’t get into it, unless you want a crappy life. I don’t want you to go through what I went through’.”

“I don’t know if dad was joking but architecture gave them a cause and passion and gave them a legacy. My duty is to continue, and put my own footprint on it. I am passionate about turning the  brand into something bigger.

Next post Parcels of Spanish Memories – The Taucker Travel Blog