Together with Air France-KLM and Air France, KLM Royal Dutch Airlines announced that it will be bringing its targets for reducing CO2 emissions in line with the UN Paris Climate Agreement. This agreement aims to limit global warming to well below 2°C above pre-industrial levels in order to combat the impact of climate change. Very recently, a number of airlines  including KLM  committed to achieving Net Zero by 2050 under the IATA umbrella. This constitutes another important aspect of the Paris Agreement. We are now taking the next, crucial step for the entire Air France-KLM Group. We are committing ourselves to the CO2 reduction path developed by SBTi specifically for the airline industry. This will bring our targets further in line with the Paris Climate Agreement, says Pieter Elbers, CEO of KLM.

Air France-KLM, Air France and KLM have each signed a letter of intent in which the group declares its commitment to cooperating with the Science Based Targets initiative (SBTi). Based on scientifically substantiated targets to reduce CO2 emissions and working in consultation, a corresponding path will be established and validated. Pieter Elbers, CEO of KLM Royal Dutch Airlines: The earth has clear limits as to how we use our resources and the volume of emissions we generate. In recent years, we have worked hard at a national, European and global level to cooperate, innovate and define agreements. By establishing SBTi, we can further reduce our CO2 emissions step by step in a transparent manner. Initiatives including fleet renewal, Sustainable Aviation Fuel (SAF) and further operational innovation and efficiency will enable us to achieve the targets. (see enclosed KLMs pathway towards the Paris climate goals)

In 2019, KLM introduced its Fly Responsibly sustainability initiative, directed at transforming KLM into a more sustainable airline. In addition to fleet renewal, scaling-up production and use of SAF form the cornerstone of KLMs approach. Cooperation and supportive policies are needed to create a level playing field upon which SAF will become the standard. Elbers: A successful, ambitious climate policy hinges on cooperating well with industry parties, knowledge institutions and governments. Together, we must reach solid agreements that truly support the energy transition.

Despite the huge impact of Covid-19, sustainability has remained a top priority for KLM. In 2021, KLM added the first of 25 new Embraer 195-E2 aircraft to its fleet. This aircraft emits 31% less CO2 per passenger than its predecessor. KLM also took part in trials involving sustainable taxiing and operated the worlds first commercial flight powered by a fuel mixture containing synthetic kerosene.

How does SBTi work?

SBTi is a partnership between four NGOs and knowledge institutions: the Carbon Disclosure Project (CDP), World Resources Institute (WRI), UN Global Compact and World Wide Fund for Nature (WWF). SBTi helps private-sector organisations to set climate targets in line with the Paris Climate Agreement, based on what science tells them is necessary to honour the agreement, and to give short and medium-term targets concrete shape. Working with SBTi will enable KLM to gradually reduce its CO2 emissions per passenger-kilometre. Until the targets for Air France-KLM are set and validated, KLM will continue to work on its current ambitions for 2030. 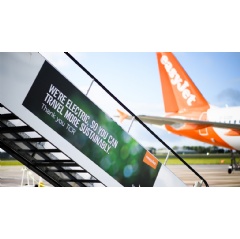