Skip to content
Recovery in air travel slowed in January, impacted by Omicron
11/03/2022,
by WiT,
in News,
Regions,
Sectors

THE International Air Transport Association (IATA) announced that the recovery in air travel slowed for both domestic and international in January 2022 compared to December 2021, owing to the imposition of travel restrictions following the emergence of Omicron last November.

“The recovery in air travel continued in January despite hitting a speed bump called Omicron. Strengthened border controls did not stop the spread of the variant. But where population immunity was strong the public health systems were not overwhelmed,” said Willie Walsh, IATA’s director general.

“Many governments are now adjusting Covid-19 polices to align with those for other endemic viruses. This includes lifting travel restrictions that have had such a devastating impact on lives, economies and the freedom to travel.” 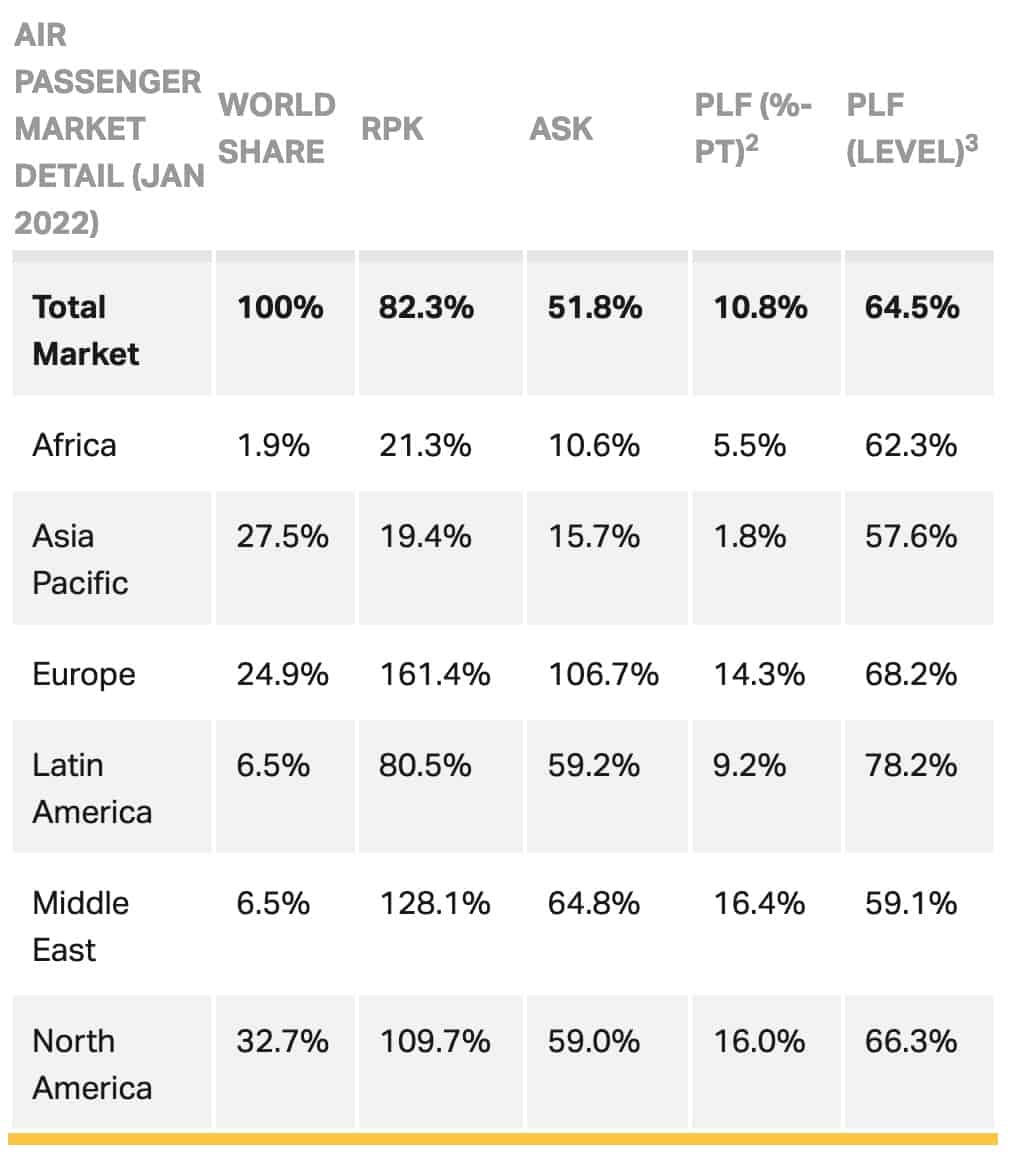 Asia-Pacific airlines saw their January international traffic climb 124.4% compared to January 2021, down significantly from the 138.5% gain registered in December 2021 versus December 2020. Capacity rose 54.4% and the load factor was up 14.7 percentage points to 47.0%, still the lowest among regions.

Latin American airlines saw a 157.0% rise in January traffic, compared to the same month in 2021, an upturn over the 150.8% rise in December 2021 compared to December 2020. January capacity rose 91.2% and load factor increased 19.4 percentage points to 75.7%, which easily was the highest load factor among the regions for the 16th consecutive month. 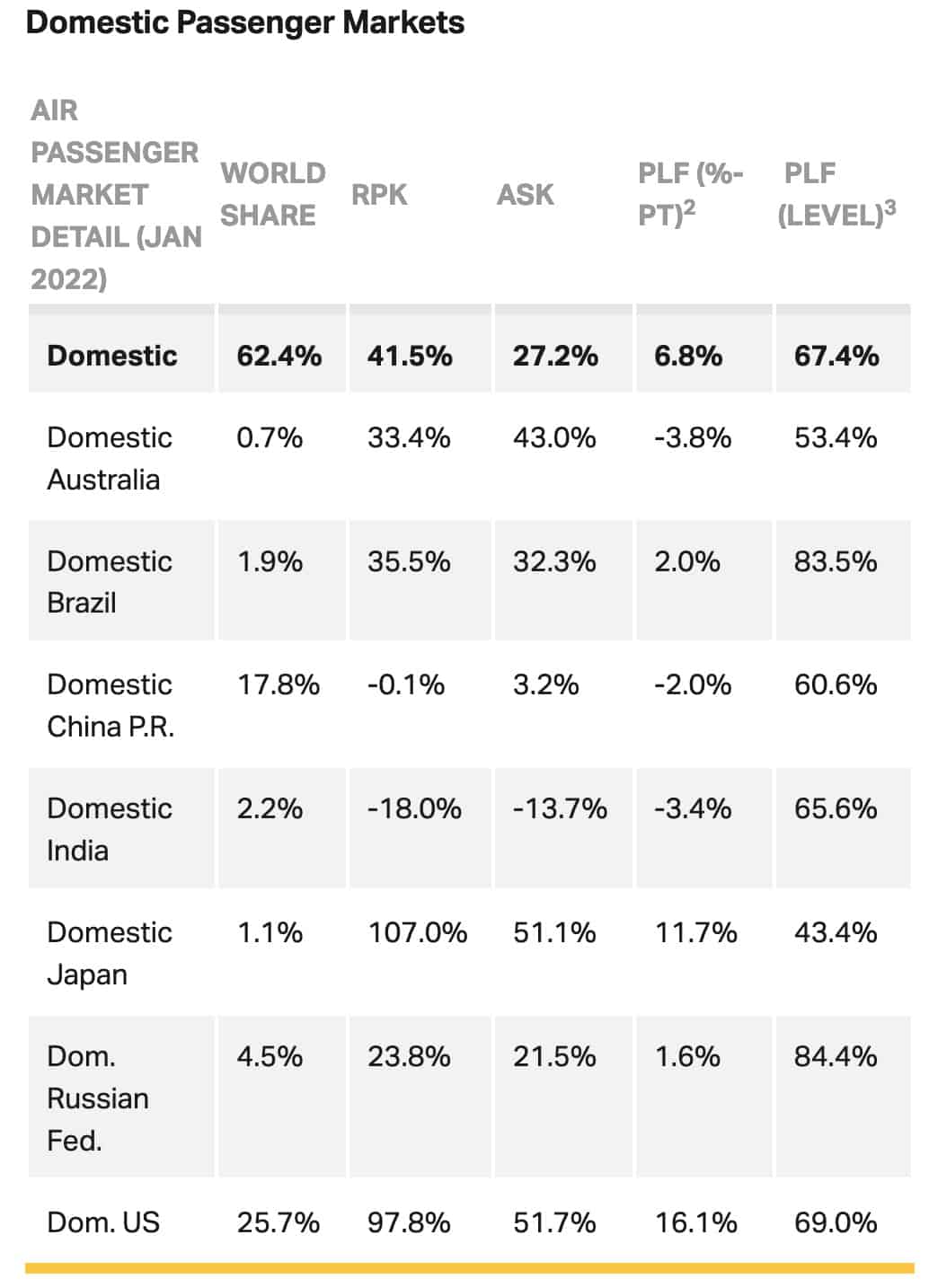 Japan’s domestic demand was up 107%, which was the fastest year-on-year growth recorded, although on a seasonally adjusted basis, January 2022 traffic slipped 4.1% from December.

India’s domestic RPKs fell by 18% year-on-year in January , which the biggest decline recorded for any of the domestic markets tracked by IATA. On a month-on-month basis, seasonally adjusted RPKs dropped by nearly 45% between December and January.

Despite the strong traffic growth recorded in January 2022 compared to a year ago, passenger demand remains far below pre-Covid-19 levels. Total RPKs in January were down 49.6% compared to January 2019. International traffic was down 62.4%, with domestic traffic off by 26.5%. 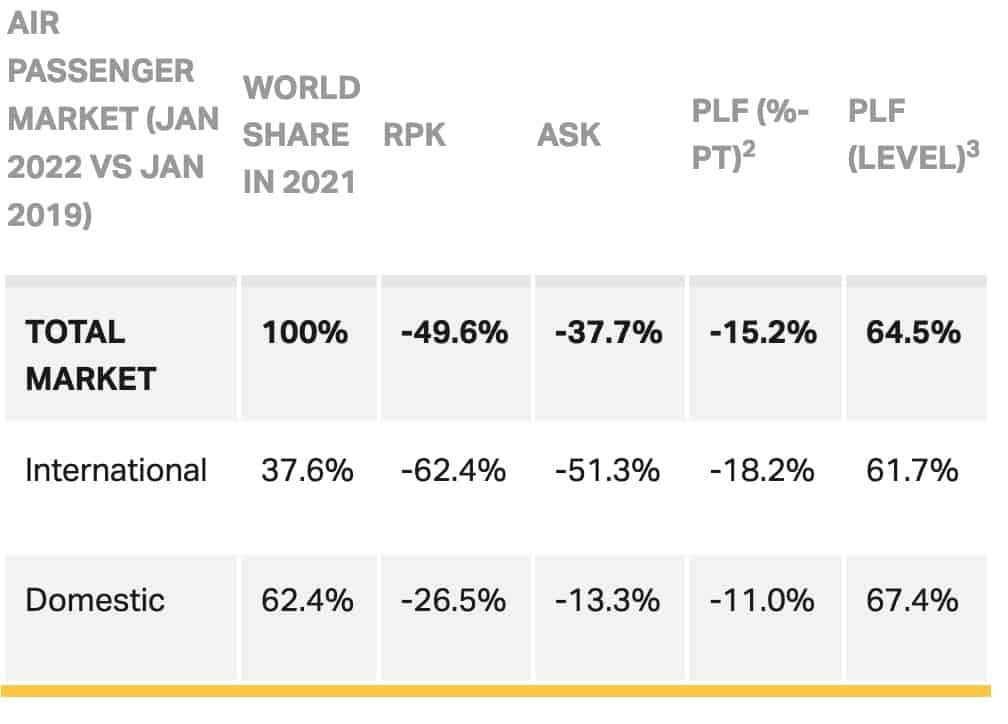 January figures do not include any impact from the Russia-Ukraine conflict which began at the end of February. The resulting sanctions and airspace closures are expected to have a negative impact on travel, primarily among neighboring countries.

In addition to these disruptions, the sudden spike in fuel prices is putting pressure on airline costs.

“When we made our most recent industry financial forecast last autumn, we expected the airline industry to lose $11.6 billion in 2022 with jet fuel at $78/barrel and fuel accounting for 20% of costs. As of 4 March, jet fuel is trading at over $140/barrel. Absorbing such a massive hit on costs just as the industry is struggling to cut losses as it emerges from the two-year Covid-19 crisis is a huge challenge. If the jet fuel price stays that high, then over time, it is reasonable to expect that it will be reflected in airline yields,” said Walsh.

“The past few weeks have seen a dramatic shift by many governments around the world to ease or remove Covid-19-related travel restrictions and requirements as the disease enters its endemic phase. It’s vital that this process continue and even accelerate, to more quickly restore damaged global supply chains and enable people to resume their lives,” said Walsh.

“One step to encourage a return to normality is to remove mask mandates for air travel. It makes no sense to continue to require masks on airplanes when they are no longer being required in shopping malls, theatres or offices. Aircraft are equipped with highly sophisticated hospital quality filtration systems and have much higher air flow and air exchange rates than most other indoor environments where mask mandates already have been removed.”